Medicare’s Part B Increase in 2016

The recently adopted balanced budget legislation included a last minute gift to 30% of Medicare beneficiaries. It was more of a gesture than a gift, because it didn’t eliminate a Medicare Part B increase for 2016 entirely, but reduced the amount significantly. All beneficiaries would have experienced an increase had it not been for a “hold harmless” provision that protects a majority of beneficiaries when there is no Cost of Living Adjustment (COLA) in a given year.

As a result of this hold harmless stipulation, if you are enrolled in Medicare Part B and are receiving Social Security in 2015, you are held harmless of any premium increase. You will continue paying $104.90 per month for Medicare in 2016.

Those paying a higher Part B premium due to higher income will also see increases. Click here for the 2016 Income Related Monthly Adjustment Amount (IRMAA) chart.

Problem solved, right? Not really. To elevate this added burden, Congress took a loan from the Treasury. How will the loan be repaid? $3 of the new premium will be used to pay back the loan.
With this last minute correction an immediate problem was avoided. But, with rising health care costs and low COLA’s being the norm, a permanent solution is needed. 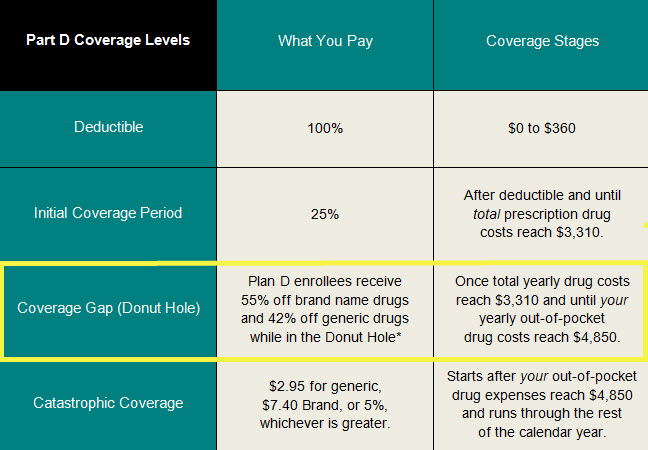 At OnlyHealthInsurance, we find the most misunderstood level is often the Coverage Gap, also known as the Donut Hole. During a plan year, Part D plan members may experience an increase in their share of drug costs.This is often the result of reaching the Donut Hole where drug costs typically increase from amounts paid in the Initial Coverage Period.

Before I explain how the Donut Hole works, it is important you understand the definition of True Out-Of-Pocket (TrOOP) costs. TrOOP costs are the payments that count toward your Medicare drug plan out-of-pocket maximum of $4,850. Your drug plan keeps track, and will report your TrOOP expenses on a monthly basis. This way, you can keep track and know when to expect Catastrophic Coverage to kick in.

Therefore, the total amount required to reach the TrOOP maximum and enter the Catastrophic Coverage phase will depend on whether spending is on brand-name drugs, generic drugs, or a combination of both.

Some good news: More savings in the drug coverage gap coming through 2020. By 2020 government subsidies, discounts from drug companies, and plan coverage are projected to cover 75% of medications in the Coverage Gap.

Visit OnlyHealthInsurance to learn more about Part D and how we assist our clients.

Q: If drug costs typically rise during the Donut Hole, does it make sense to purchase all your medications through your drug plan?

A: If you have extremely high drug costs and anticipate entering and exiting the Donut Hole during the year, you would want to purchase as many prescriptions through your drug plan as possible to benefit from the Catastrophic Coverage period sooner where your share of costs is low. However, if you anticipate coming close to or entering the Donut Hole, but not necessarily exiting it, you could argue staying in the Initial Coverage level as long as possible could result in an overall lower out-of-pocket cost.

Of course, should you have an unexpected illness during the year requiring high-cost medications, it could catapult you through the Donut Hole and into the Catastrophic Coverage level where your share of costs are lower. In this case, the amount paid for medications outside the plan, as in the example above, would not benefit you.